I had the pleasure of being invited to the celebration of the Golden Stiletto Awards, which recognizes the best digital advertising campaigns created by the young female professionals from Great Britain.
The event was celebrated on the 19th of November, in Canon Getty Images Gallery, in the London city centre, where the top females of British advertising industry, members of She Says community meet every month to share their experience and help people to either get started or work their way up. The meetings have a loyal public and every time more new participants.

This brilliant initiative has been brought to life by Laura Jordan Bambach, Head of Art in Glue London and Alessandra Lariu, Group Creative Director at McCann NYC. This time girls met to reveal who is the great winner of the golden stiletto shoe.

From the beginning the atmosphere was informal, lively and very feminine. In fact, the security staff on the gate and the waiter were the only men around.

During the welcome cocktail and then throughout the entire gala hundred or so female voices, laughs and whispers 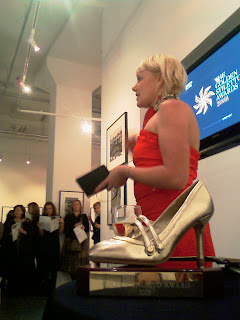 reverberated in the ambiance. As there were mostly young creative women, the spirit of female creativity was in the

Jury members have described the level of participating works as very high. From the 28 campaigns competing the jury have chosen the top 5. While the finalists were presenting their campaigns, the public was reacting spontaneously.

The award winner, Yasmin Quemard from Dare Digital, showed her surprise and enthusiasm at the same time. As she said, she didn’t really expect to win, and was really happy that she managed to bring the Sony Walkman Project to life. As she remarked, it was a product of teamwork (creative team: Yasmin Quemard, Andy Amadeo and Simon Burnett).

It was really exciting to meet all these young creatives, to watch the fruits of their efforts and share their enthusiasm. Many of them were there, because they are convinced that it’s really worth to do what inspires you. And they find an inspiration in events like that. Well done sisters!